Addicted to drugs. Addicted to alcohol. Filled with rage. Hopeless. Depressed. Tired out. My career started off very early. However let's get back to the beginning: I spent the first three years of my life with my Mother and my older sister. I always felt deeply loved. My Mom however had a bipolar disorder, had alcohol and drug problems and was always around brutal and sadistic men. My sister only learned how to talk at the age of ten, therefore it sometimes felt that when my mom was in a depression, nobody would speak a single word to me for weeks ... 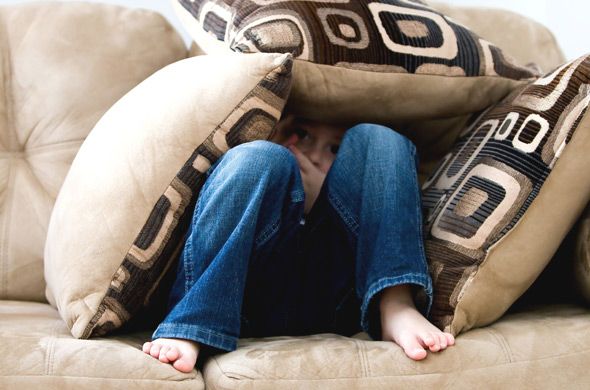 I remember a lot of things and all of these stories where confirmed by my mother over the last couple of years. For example a few men threw beer bottles at my Mom and forced her to crawl through the splinters of glass while being constantly threatened and yelled at. One time someone tried to suffocate my sister and me – thank God we survived. One of her boyfriends always grabbed me by my neck and held me out of the window and threatened to drop me if I were not to do what he commanded. My mother screamed for help, but when our neighbours saw me they would just start to clap enthusiastically. Unbelievable. Mom resigned. She was unable to defend herself and us. Despite all of this I still knew she loved me with her whole heart. What a powerful woman! 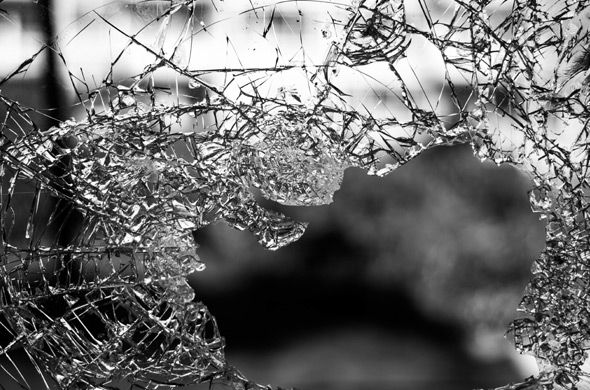 My new family and I

We were often picked up by the police or stayed there over night. One night I was brought out of the prison cell while my mom was sleeping. When she woke up her beloved son was gone and she was prohibited from any contact for 9 months. I thank God so much for giving her the strength to make it through all of this. Within a few months time I lived with several families. At one of them I was abused by two of the biological children. God however knew where I had to go, so my sister and I ended up at two different christian families. We were very lucky that her parents went to the same church as mine. My foster father was a pastor there and my foster mother quit her job in order to take care of me. 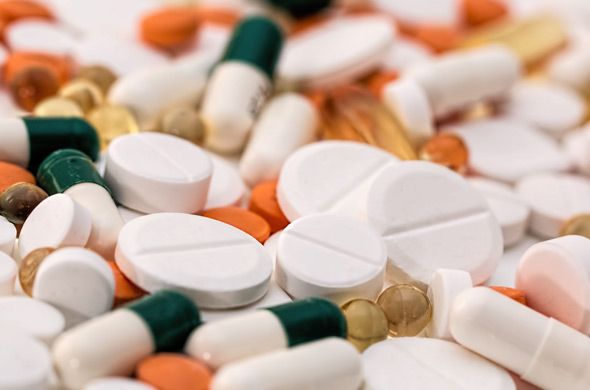 In a way I was a psychopath as a kid. There were only absurd and sick things going on in my mind. Already in the first class of primary school I started talking about weird stuff and would crawl under the tables to grope girls. I always thought about sex or how to start the next fight. Or maybe I was just deeply unhappy. At night I could barely sleep due to having the same nightmare, in which I saw my Mom get shot, for years.
At the age of six I started burning thing and shooting glass bottles on the highways. When I was eleven I had my first alcohol intoxication and started to smoke. I had my first joint when I was 14. At the age of 15 I smoked weed every day. When I was 16 I drank alcohol every day. To finance this lifestlye i sold drugs for 13 years.
Chemical drugs soon started to follow. At the age of 19 I started taking Morphium and soon after that all kinds of different pills. I reached the point where I just took everything that I could get. For years I didnt even have a social insurance or my own flat. I just slept in all kind of apartments.

At the age of 21 my attitude towards life was: I won't kill myself, but will party so much that I won't reach my 30's. When I was 23, I started spitting blood and was brought to a hospital. I was diagnosed with COPD, a strong lung disease which made me have difficulty breathing. At the age of 28 I finally tried my first detoxication. 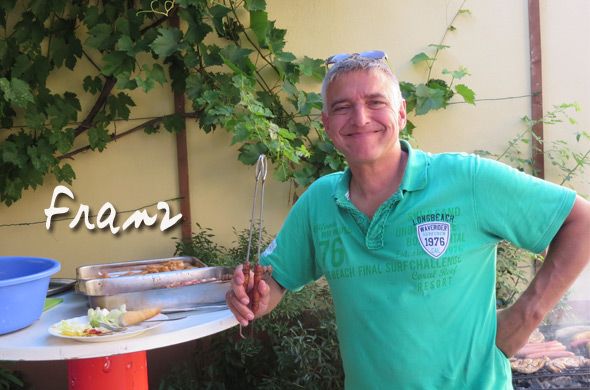 My foster father advised me to go to FCJG Vienna, but I first wanted to try a governmental treatment. I only wanted to quit alcohol, but wanted to keep doning drugs. I endes up dropping out of the therapy. Half a year later I finally went to HELP-FCJG straight after a clinical detoxification.

The first weeks were very difficult for me. My behavoir was especialy difficult. After one month we had a discusion whether it was sensible for me to continue living here. For almost an hour i barely talked and only thought about how „great" it would be to go back to my city and get some drugs. God gave Franz Hochschuh and Paul Maurer the necessary patience and after an hour I inally opened my heart and we decided that I would stay here. 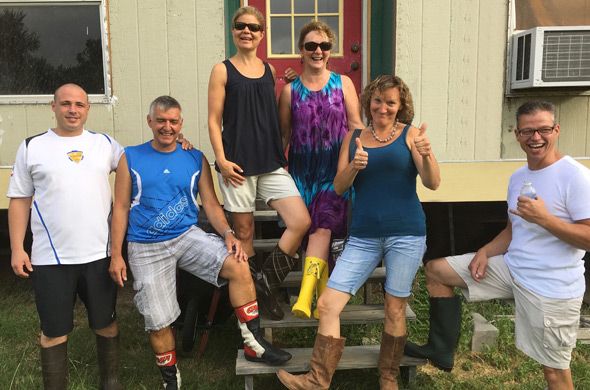 I was welcomed into the community as if I were a family member that was long gone and had finally returned. Thank you so much for that. What happened after that was beyond my imagination:
During a lecture by Heidi about speaking in tongues I received the ability. Oh man, that annoyed me so much. »Don't stop, „speak louder.« However, that was the essential cornerstone. This is how I experienced a lot of things here. At first they would get on my nerves or I just didnt know what to do with these things, but suddenly I realized their spiritual value and could not get enough of them. This had huge, positive impact on my life. Thanks to all of you. All of you have a special place in my heart.

Come to the Light

Last May I went to Lüdenscheid to Come to the Light where Achim and I spent four days at the Wiedenhof (Drug rehab of the FCJG in Germany). There I met a lot of people that were around the same age as I and were fully in love with Jesus. This made a strong impact on me. We went on an outreach in the city. To see the way that these people from the Wiedenhof were living their lives for Jesus broke the ice for me. The following day, I went to a workshop where I bowed down my knees and praised the Lord in front many strangers. It was very challenging to overcome myself in that moment. But from the moment I started, I felt something inside me changed. My pride was changed into something meaningful.

In the evening I was responsible for greeting visitors. A man asked me if I could pray for healing for him. I prayed right in the entrance area for him. 12 hours earlier that would have been unimaginable. This is how great the Lord is. Later on I saw a boy and knew right away that I should pray for him and so I prayed for him. I returned to my post, but at the end oft the evening a young lady told me that the boy I had been praying for gave his life to Jesus. I couldn't believe it and was filled with joy. Jesus truly set me free. Greetings to Wiedenhof, you guys are a great example, just like the people here in Vienna. I´m thankful that I got to know all of you. 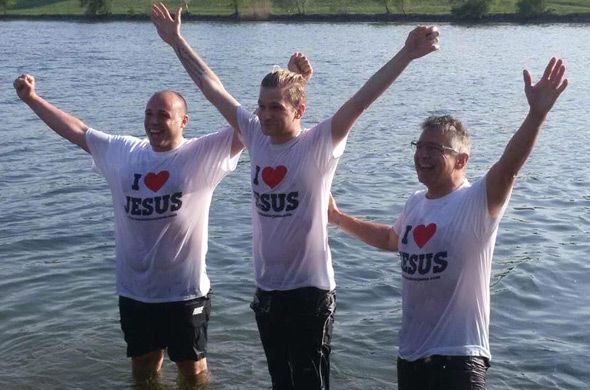 Baptism and confession - he is making everything new

Then there was the Open Heaven seminar in Vienna. It motivated me and gave me the desire to finally get baptized. The Monday after that weekend, I had a wonderful two-part dream throughout which I called people twice to give their lives to Jesus, which they did.

For the last 19 years I have been producing rap music. I started recording songs at the age of 15 and so over time I had created a colletion of about 200 songs. I had the desire to listen to my own music again, however, it all felt empty and cruel, partially even demonic, sick and perverse. I decided to let go of it and talked to Veronika the next day. I told her that I had planned to burn it all during my baptism, but she recommended me to throw it all away immediately. I struggled to destory my lifework but after an hour we set off to the next dustbin and I threw away all my CDs that I had ever made. Then I delected all of those track on my desktop. Later I made a life confession to Franz. I would have never believed that I would be able to reveal all my dark secrets to another human being. God however gave me the power to do so and set me free from all my sins. 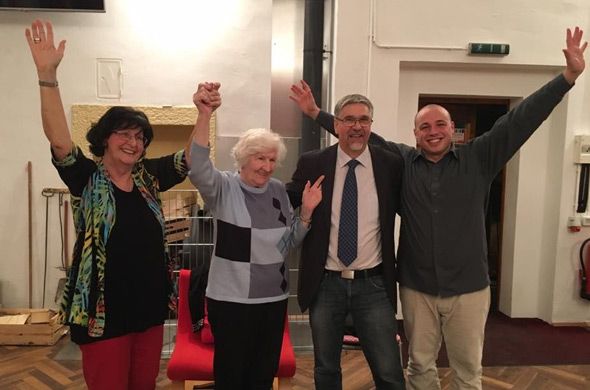 On the next day I got baptized by my foster father and the FCJG celebrated with me. My foster parents and my biological mother arrived in the same car. United in love with a common son. What a great honor. I am so blessed by God. It is unbelievable. And he frees me more every day. God so good to me. 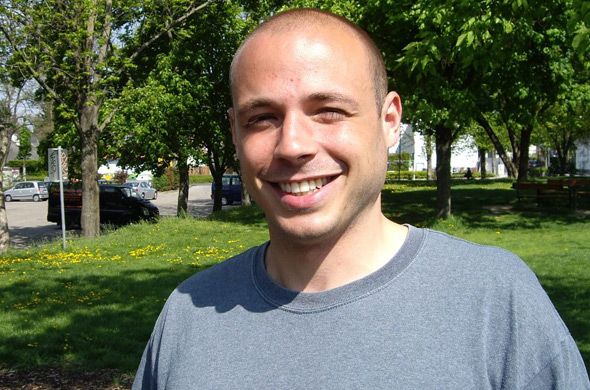 It's never too late

It's never too late for anybody. No matter how ruined or messed up your life seems to be. No matter how much you doubt yourself. No matter how terrible your sins may seem to you, nothing is impossible for God. Now I have been clean since march 2015. I do not dring or smoke cigarettes anymore. It is beautiful. I am so thankful and want to invite you to experience this holy release. There are no unsolvable problems. There are no hopeless situations. Nothing is impossible for Jesus Christ. Come to Vienna and experience what I have experienced. God loves you that he gave his only son to die on the cross for all your sins. Those whom the Lord makes free, truly are free.
Paul
Go To Top
To increase the comfort using our Website we are using Cookies.
read more